Market Pullbacks May Not Be Worth Waiting For 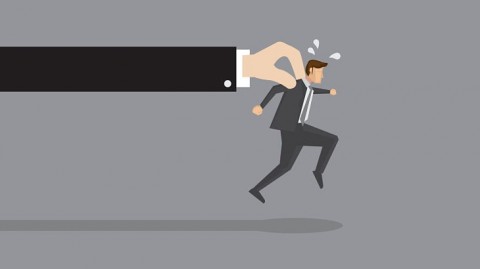 I have noticed that many retail investors are currently sitting on cash and waiting for an opportunity to get back in the market. Many of these people either pulled their money out of the market after the Financial Crisis, or raised cash before or after significant political events like Brexit, or the US and European elections.

Psychologically, the degree of cash on the sidelines can cause an investor to join the ‘gloom and doom’ camp, where they no longer cheer for economic progress, but rather look forward to the next economic shortfall or political misstep to justify their bearish positioning.

Some in this camp may have felt their prayers were being answered on May 17, when the S&P 500 registered its steepest decline since September 9 and finally appeared to be taking in all the news coming out of Washington. However, those hopes for a more significant pullback were quickly dashed over the rest of the week as the S&P 500 recovered more than 50% of its decline, and MSCI EAFE made new multi-year highs.

With so much money on the sidelines or hiding in low-risk assets and a lack of market weakness, I think there are two questions worth asking: 1) Is a market pullback likely? and, 2) Is a pullback worth waiting for?

Is a pullback likely?

I believe with fairly high conviction that over the next 12-18 months, the market is likely to experience a pullback. However, I am skeptical that such a pullback will be at the time, to the degree, or for the reasons that many investors have been expecting. One reason I do not prefer significant cash holdings is that the next pullback may happen from higher levels and therefore not present an entry price that is any lower than where the market stands today. A second reason I think investors with cash could be disappointed is that I do not envision a pullback that will be deep enough to justify the decision many investors made when raising cash last summer or fall. That is because, in our view, the recent and significant improvements in economic data and political landscapes around the world have created greater unease for those with cash on the sidelines. Investors with high cash now appear more determined to get invested, leading to pullbacks that have been both shorter and shallower than normal, which can be seen in the two charts below 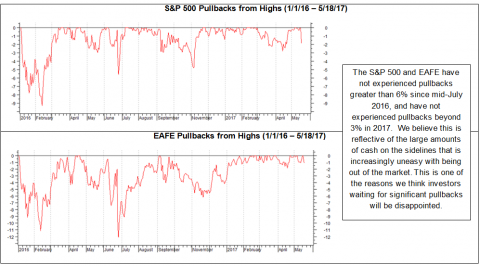 Finally, a pullback may not come for the reasons many investors expect. The old saying “a watched pot never boils” has an application to markets, in our view. Markets are most affected by the unexpected, and investors are becoming accustomed to Trump’s war with the media. With so much media attention currently focused on President Trump, the market is constantly assessing the likelihood of his administration achieving their economic agenda. For example, small-caps and material stocks, which were viewed as the obvious and disproportionate beneficiaries of Trump’s tax and infrastructure plans, have already retraced 80-100% of their relative post-election gains. In fact, we may have gotten close to the point that the bigger surprise to Wall Street would be the President’s economic agenda getting back on track.

Is a pullback worth waiting for?

I believe the answer is “no” for investors with time horizons beyond five years. That is because, for investors with longer time horizons, I believe successful timing of a market entry or exit level (market timing) can be difficult, costly, ultimately may not materially impact long-term returns, and may conflict with the efforts of an investment manager.

Market Timing is Difficult:  Market timing, which involves dramatic shifts in a portfolio’s asset allocation based on the price movements of a market, is notoriously hard. Professional market timers  regularly admit that only about half of their trades are profitable. I do not regard the tactical portion of our investment process as market timing, since our trades are typically smaller shifts and generally based on reasons that extend beyond simple price movements.

The experience of market timers is less predictable than that of long-term investors, who have historically benefitted from the fact that the US large-cap stocks have risen in value 62 months out of 100 since 1926 (source: CRSP). The odds have been even better for investors when market valuations are close to fair value when measured by our Price Matters® methodology, as they are now (Table 1). Given the different investment experiences of these two groups of investors, it begs the question, why would a long-term investor accept historically poorer odds by trying to time the market?

Table 1: Returns of Large-Cap Stocks When Valuations Are Close to Fair Value (plus or minus 10%) Using CMMS’s Price Matters® Methodology

Source: Riverfront Investment Group, calculated based on data from CRSP 1925 US Indices Database ©2017 Center for Research in Security Prices (CRSP), Booth School of Business, The University of Chicago. Data from Jan 1926 through March 2017.

Market Timing Can Be More Costly in Today’s Environment:  When an investor is being “paid to wait” as their cash is accumulating interest at the bank or yield on short-term bonds, the long-term costs of market timing can be less punitive. However, today’s low interest rate environment does not pay an investor to wait, and in fact, I believe it imposes somewhat of a penalty on money that remains on the sidelines. With short-term rates at less than 1% and inflation running over 2%, as measured by the Consumer Price Index (ex-food and energy), cash on the sidelines loses purchasing power every day it remains idle.

Market Timing May Not Materially Impact Returns of Long-Term Investors: In our view, the longer an investor’s time horizon, the less important market timing is. I believe the old Wall Street adage that “successful investing is not about timing, but about time in” holds merit for most long-term investors for two reasons. First, over long time horizons, the US stock market has generally recovered its losses, as evidenced this year with most broad US market indexes hitting all-time highs. Second, long-term investing gives the investor the benefit of experiencing what Albert Einstein called “one of the most powerful forces in the universe”: compound interest. Compound interest allows a $100 dollar investment growing at 10% annually to return more than 6.7 times an investor’s initial money after 20 years. Investors who employ market timing tend to be un-invested or underinvested more frequently and are thus unlikely to experience the full benefits of compound growth. Table 2 shows how missing out on the first 1, 2 or 3 years of a 20-year time horizon can impair potential long-term returns. In our view, the risks posed by a strategy focused solely on market timing are simply not worth the potential return for the long-term investor. If done successfully, the positive impact to the portfolio is unlikely to be significant; but, if done unsuccessfully, the negative repercussions could be substantial.

Market Timing Can Conflict With the Efforts of an Investment Manager:  The motivation for waiting on the sidelines is often a result of investors feeling like they already missed out on a bull market. While it may be true that some markets can hit levels of overvaluation that make them poor investments, investment managers with broad mandates are paid to identify and seek to avoid those markets.  At CMMS, we have been reducing our exposure to US equities, recognizing that the US bull market is now 9 years old, and I have been buying equities in developed markets outside the US, such as Europe and Japan, where I believe valuations are still considerably cheaper than they are in the United States.

An Alternative Strategy to Market Timing

Long-term investing deserves entry and exit strategies that are consistent with the investor’s goals and objectives and are based on a sounder footing than one’s ability to forecast market movement over short periods of time. I believe the goal of a long-term investor should be to get invested as soon as possible, while minimizing the risk of committing all their capital prior to a significant market pullback.

There are a number of strategies that can be used to accomplish this goal, and the strategy I have devised blends what I believe to be the best ideas from several strategies and tailors them to the long-term investor. It is a three-pronged plan I describe as: Immediately, Opportunistically, and Eventually.

·        Immediately: Based on our view that the US market is around fair value and markets outside the US remain ‘cheap’, I prefer an approach of putting a portion of our cash to work immediately.

·        Opportunistically: After not experiencing a pullback of greater than 3% thus far in 2017,I believe there is probably a pullback on the horizon. Therefore, I am inclined to hold onto a portion of our cash for an opportunity to invest at lower levels. Considering the short and shallow nature of pullbacks over the past six months, I set modest pullback targets of 3-6%.

·        Eventually: For the final portion of cash, I often set a date or series of dates over the next 3 to 6 months to invest the remaining proceeds. Once the dates are selected, I believe it is important to adhere to the investment discipline regardless of the market levels at those times.

View author's profile More posts from author
Financial planning and investment management services are provided by Bill Neubauer. With more than 25 years of experience in the financial services industry, Bill has established a reputation as a strategic thinker who enjoys working with other financial planners to advance industry knowledge and best practices.

Prior to starting his own practice in 2001, Bill served as the senior executive responsible for Bank of America’s Private Bank in South Florida. In that capacity, he led a team of 30 professionals including CPAs, CFPs, tax attorneys, portfolio managers, and estate planning experts. His team provided financial advice to high net worth clients and managed in excess of $1 billion in assets.

A long-time resident of South Florida, Bill has always maintained an active involvement in the local community. He currently serves on the University of Miami's Citizens Board and enjoys working out daily at the UM Wellness Center. He has also served terms on the boards of the Miami Art Museum, Jackson Memorial Hospital Foundation, Historical Museum of South Florida, Junior Achievement of Greater Miami and the New World School of the Arts.

Bill resides in a waterfront home in Coral Gables, Florida which also serves as the company headquarters. In his free time, Bill enjoys the beach, boating, scuba diving, foreign travel and listening to books on his iPhone and iPod.

No comments made yet. Be the first to submit a comment